Three ducks made the journey to Shoreditch in London last week for a forward-thinking talk from Robert Scoble, who delivered a keynote speech titled “The Age of Context”; highlighting mind-blowing advances with personalised technology. The evening was hosted by Rackspace in the trendy McQueen restaurant bar to a select few guests.

Matthew, Gareth and I went to meet Scoble at a Rackspace Start-up programme meet up last week. The Cyber-Duck team were warmly welcomed by Rackspace staff and presented with delicious canapés, before moving through into the main area where the talk took place. 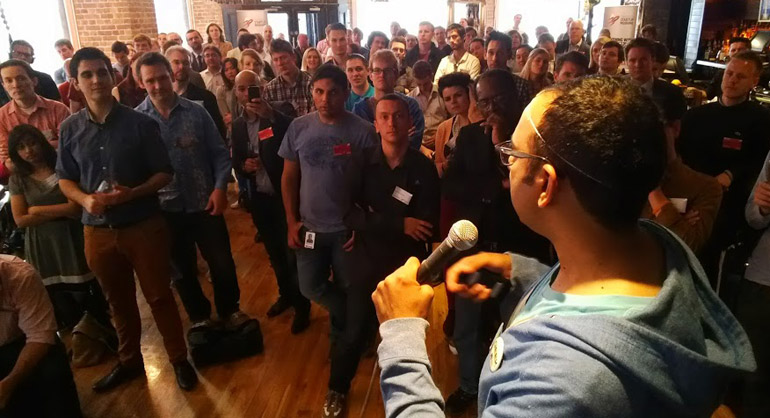 This shot of the audience was taken on Rob Scoble’s Google Glass.

The Age of Context

As Robert took to the stage, we immediately spotted the Google Glass he was wearing and knew this would be a fascinating and engaging talk. This was Robert’s vision of the near future, where an increasingly connected world is seeing the context of information redefined.

One of Robert’s first key points was wearable computing. This is defined by the gadgets that people wear, which gather data about the user and present them with information. Notable items include smart watches, such as the Pebble and the Google Glass, which Robert gave an impressive demonstration of.

Other elements that determine context include big data and data computation, sensor data, social network data and location data. Together, this paves the way to a world of endless possibilities, where individuals or businesses will have access to more data and information about almost anything, using receivers and data capture methods which are only just coming to light. 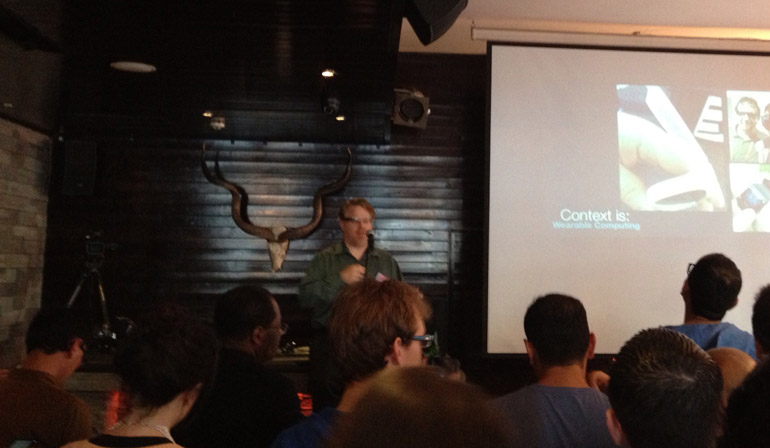 Some of this will be nothing new to some people; gadgets are getting smaller and their capabilities increasing, while large companies like Facebook and Google store masses of data about their users, which they selectively make available to advertisers.

What was really interesting was just how vast the range of data gathered could be and how it could be gathered. Robert Scoble anticipates a highly personalised world but for this to happen, users will be more open for tracking.

One example of this Robert highlighted was of a hotel chain; with new ways of tracking customers, hotels will be able to identify a customer’s favourite drink at the bar or what dessert they like after a meal. With that data stored internally, it will become available to all hotels across the chain. He predicted that one day they would have the ability to immediately identify a customer from facial recognition technology, and have a drink ready for them at the bar, should they be so inclined.

This allows businesses to become far more proactive in areas such as customer service, creating value in customer engagement and delivering personalised services. Companies will be able to anticipate a customer’s needs or problems before they arise and solve these issues, improving their overall experience.

Location data could be tracked too. Imagine, for instance, that you are out for dinner in London one evening and you receive a notification from your favourite chauffeur company. They tell you that your preferred driver is in the area and available to offer the journey home; the chauffeur already has your address details stored (already common practice).

For some people, this can be quite scary, but it’s a prime example of a personalised service mixed with location data and it’s very possible in the near future. Of course, there’s the issue of privacy but it’s up to the customer to determine if the value of the service is worth being tracked by the company providing it. 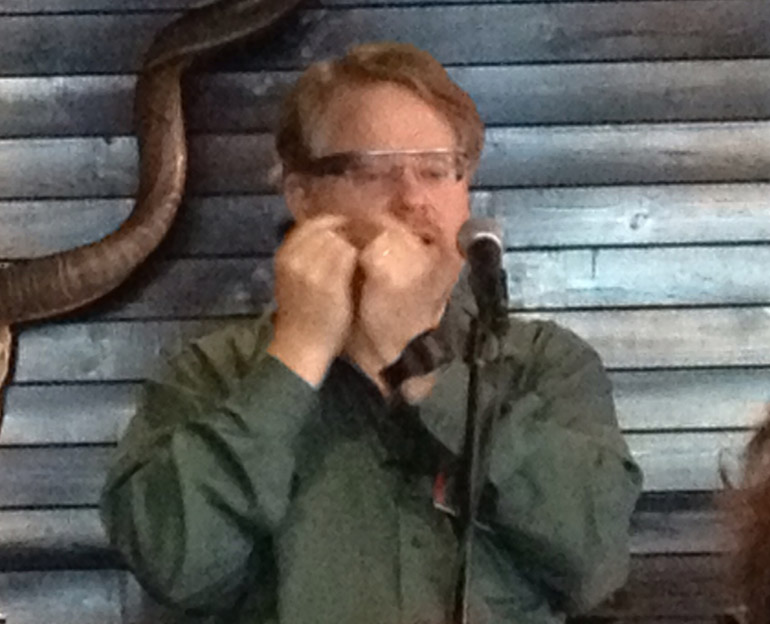 What makes ideas like this all the more interesting is that the technology is getting cheaper year on year, allowing for an increasing number of start-ups to get experimental and ply their ideas into a market with lowering barriers to entry.

Robert told the audience that the average tech start-up costs around $10,000 (approx. £6,500). Furthermore, with technology like Google Glass actually costing Google less than $150 to acquire the materials to build it, the technology becomes easily accessible.

Following this, questions opened up from the audience, one of the most notable being, “If the technology is so cheap and a start-up can launch with $10,000, why do they ask for hundreds of thousands, even millions, in investment?”, to which Robert simply replied, “Because they can.” It was an interesting exchange that allowed Robert to elaborate on certain details as he was given more questions.

Moving forward with the times, not against them

Robert eventually ended the evening with a rather philosophical statement, “London has to find its own path to developing its tech culture”, stating that we should not necessarily follow in the footsteps of Silicon Valley nor other tech cultures like Israel.

In essence, we are being told to go our own way by letting our start-ups, innovations, technologies and people define what our tech culture is. With Shoreditch as our vibrant hub and increasing investment into new technologies, I think London has started to find its path and is paving the way for tech start-ups to emerge and take to the world stage.