Danny's talk was on Cyber-Duck's new interactive iPad web app ‘DuckPad’, which is now completed! You can find more information about it on the DuckPad Tumblr blog. We'll be posting more photos and video from the event as and when we get our hands on it. 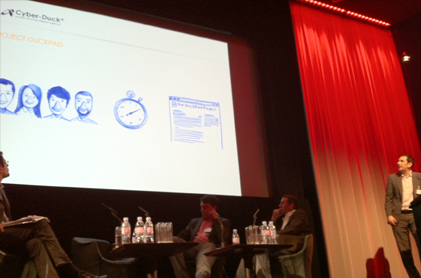 We’re working on a new project for our long term client, Wisteria. The project is a new website based around their business plans service, following on from its recent popularity. News from another client project; ‘The Far Horizons’ project is now fully designed and at the coding stage! We’ll be announcing it on here when the website launches.

Finally, the most important Cyber-Duck news of all…Clement is leaving. After working at Cyber-Duck for more than 6 months on his SUPINFO placement, he is going back to France to complete his Academic studies. Clement has been a real asset to the team and his skill and dedication has shone through every day in his time here. We’ll miss having him around, Good Luck Clement.

RIM (the makers of Blackberry) are looking to break into the tablet market. The company has announced this week that it is working on a business-centric tablet, which it calls ‘the world’s first professional tablet’. The tablet is already in the hands of a few select enterprise customers but RIM claim it won’t be widely available until next year.

Twitter have started to more widely roll out the big change in layout and functionality it has been talking about for some time. Twitter claim it will provide “an easier, faster, and richer experience” to Twitter users. The main changes include a more user-friendly design, embedded media, related content and the ability to see mini profiles without navigating away from the current page.

Google have been working on a brand new image format ‘WebP’, which they claim after tests on around 1,000,000 randomly selected images “resulted in an average 39% reduction in file size” without “perceptibly compromising visual quality.” We’ll be keeping a close eye on its progression as it could be great for mobile use, however it’s likely to be some time before it becomes widely used as most browsers and softwares cannot yet recognise the format.