The UKTI “Technology World” exhibition took place on Tuesday and Wednesday of this week, with Jerome, Khaled and Alex representing Cyber-Duck.

At the exhibition, Cyber-Duck demonstrated how Eye Tracking allows dramatic improvements in website and application usability through studying the way real users interact. This event took place alongside the UKTI workshop in Cambridge which was designed to support UK SMEs who are looking expand their businesses globally.

The workshop was conducted by Hillary Green, a UKTI International Trade Adviser. As well as learning a lot at the event, Danny presented Cyber-Duck's international successes, future plans and contributed to the group's general understanding of how important digital marketing is in today's era. 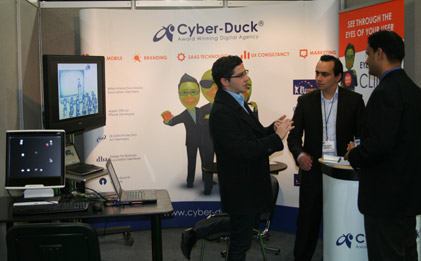 We exhibited at UKTI's event, showing our eye tracking tech to eager visitors.

In other industry news, Google launched their Chrome Web Store, allowing users of the popular browser to download thousands of paid and free apps, extensions and themes directly from a new tab. This comes as another step towards getting users used to the upcoming Chrome Operating System, which is entirely based around accessing applications (and anything else you use) from the cloud. Google also released their Zeitgeist for 2010, announcing to the world that the fastest rising query on Google was “Chat Roulette”, closely followed by “iPad”.