On September 14th, Cyber-Duck attended a fantasy survival experience day by Zed Events. This was at an abandoned shopping mall in Reading with actors dressed up as zombies.

The aim of the game is to experience a survival situation, working together to survive a zombie outbreak. Below is the tale of that day as seen by Cyber-Duck QA Analyst Nyasha Mukonoweshuro.

12:00
The Cyber-Duck team have arrived at the rendezvous point outside the abandoned shopping mall in Reading. Spirits are about as high as hunger levels. Some of us have wandered off to get a bite to eat... 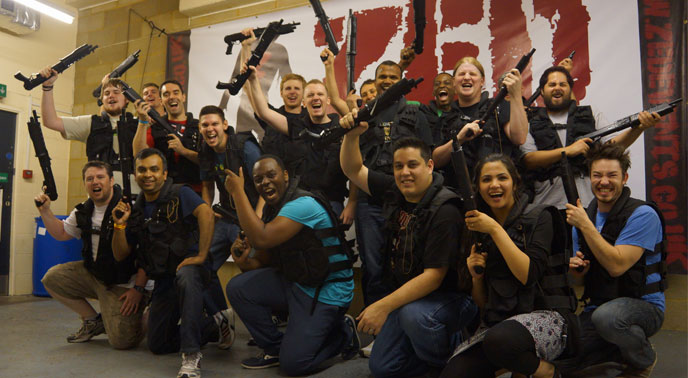 12:30
A man in black approached us and asked several questions relating to health and the fear of clowns. A couple of us are unsettled by this, myself included. Four other people join us. Three nervous looking men and a rather quiet woman. A bit of banter is exchanged as we familiarise ourselves with the new additions to the now 18 strong group.

13:00
The man in black has taken us inside the shopping mall through a side entrance. We have been told to sit and wait in the corridor as he heads forward to check a few things. We are greeted by a Police Constable who makes us sign some papers. Some health and safety guidelines including a waiver.
The group feels optimistic. We are exchanging more jokes and banter whilst putting together verbal strategies to stay together at all times.

13:10
As we were talking in the corridor, the lights went out. Our eyes struggle to adjust quickly as we initially get sunken in pitch darkness. A sudden and very loud bang comes from the shut door we came through. Then another. The noise becomes louder and more frenzied. As our eyes adjust and we can just about make each other’s basic details, we catch glimpses the panic in each other’s eyes, exacerbating the situation. Some break from the group and run, just in time to nearly bump into three armed policemen with torches. They guide us all into a slightly better lit room.

13:15
The lead policeman has told us there has been a reported outbreak. People who should have died are being reanimated and feeding on the living. The police are doing all they can to contain the situation, but as far as they are aware, the city has been overrun. Right now, the three police men are fighting to protect any survivors in the shopping mall. As far as we know, we are the only ones remaining. Our objective now is to safely get to the extraction point on the top floor for a helicopter rescue.

We have each been given a protective vest, torch, bottle of water and a shotgun for our protection. Fortunately there is enough for all of us. We are also given some advice:

13:30
We carefully make our way through the mall. Along the way, we discover the unfortunate fate of the survivors and other policemen through CCTV footage. It dawns on us that at some point today, we will have to shoot them down or be eaten.

We also discover that we need to obtain a briefcase with classified information on the outbreak before the extraction. We occasionally split into two teams to search all of the floors. Along the way, the quiet woman got captured by the undead and turned into one of THEM. One of the police men who went ahead has also been infected.

13:55
Success! We find the briefcase and make a quick dash to the extraction point, shooting down any creatures we come across.

We reach the extraction point, but there is no helicopter. We learn from a radio transmission that it got diverted elsewhere on a more urgent mission. We have been left stranded to fend for ourselves...

14:20
Panic! We run off in different directions, most of us opting to stay in small groups and do all we can to stay alive. We’ve been shooting and running. Picking up ammo and supplies where we can find it. Most of it is in the basement floor, which incidentally is by far the most dangerous area. Some braved the journey. Only a few of them returned.

15:30
In the chaos, we found a survivor scientist who suggests he knows of an antidote. If we can find this, then our rescue will become a top priority mission for the military, guaranteeing an extraction. We would be heroes...
We re-group and split up to find the bottles containing the possible cure.

16:10
Success! The last bottle has been found and we rendezvous on the first floor for our military rescue. Unfortunately, hoards of the undead have followed us there. We probably made too much noise celebrating the prospect of our rescue. We are now cornered with a wall behind us, and death ahead. We have no choice but to make our last stand and time for the military’s arrival.

The battle is long and fierce. It feels as if we will be locked in a battle for survival for the rest of eternity. But as reality sinks in, we realise we are losing ground. We now have our backs against the wall and ammo is hopelessly low. We keep fighting until there is nothing but air inside our guns. Despite ourselves, we continue trying to shoot. Hoping a lucky shot in the barrel… The situation is hopeless. We did our best…

16:40
Boom! The military arrive just as the zombies are bearing above us! We’re saved. We manage to get away with our lives and the antidotes. The Ducks are victorious… Mission complete!