Keeping Track of the Team with Duckfinder

For Quack Hack 2014, the Duckfinder team was inspired to build a web app to remedy frustrating flaws in the company calendar. A graphic interface could accurately track and visualise our ducks’ movements, increasing visibility while out of the office for meetings or events.

Where Are the Ducks?

Team Duckfinder – Danny, Raj, Clement and Calum – admirably kicked off the weekend with no prior discussion, research or planning for their ‘big idea’. They believed the company calendar (supported by Microsoft Exchange) was not good enough at tracking the movements of our busy ducks. Different teams are often out of the office, meeting with clients and prospects, or sharing their wisdom at leading industry events. It can be difficult to estimate when they will return, due to unexpected delays such as transport issues or prolonged meetings. Of course, in these situations they may not have a chance to update the calendar, but could be needed back in the office.

The team planned to build Duckfinder: an web app with a striking graphic interface, believing this could automatically track, visualise and share the movement of the team far more effectively. 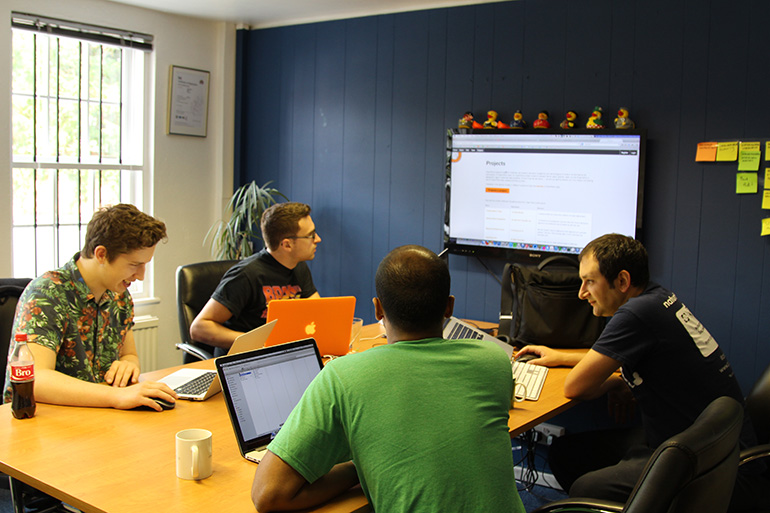 The Duckfinder team brainstorm their intiial ideas for a web app that could track the movement of the team.

This time last year, Google Latitude would have been the perfect API to provide location data for Duckfinder. The Google Maps feature meant mobile users could share their current location with a chosen few, controlling whether to show their exact position or the city only.

Cursing the retirement of the tool in August 2013, the team spent a substantial amount of time researching and testing the capabilities of other API frameworks, such as Foursquare and Geoloqi. Provided by The New York Times RAD group, OpenPaths was selected as a wise alternative to Latitude. The tool avoids wasting battery life, supports multiple users, and location data is highly secure and encrypted.

Confident in their choice, the team confirmed a feature list for the Minimum Viable Product (MVP). There would be a secure web login to view the map of staff locations, including name, image (via Gravatar), and time of last update; they also aimed to tag locations, to indicate our Elstree and London offices, for example.

Clement and Danny used Laravel, our PHP framework of choice, to set up the development environment. They found it extremely tricky to connect to the OpenPaths API, as it is still in soft-launch at the moment. Clement tried various OAuth components with Laravel before finding success with using the Python script provided by OpenPaths. From there, the Python script was set up on our web server using a CGI script, and he just had to ‘call it’ from the Laravel application to receive the data. 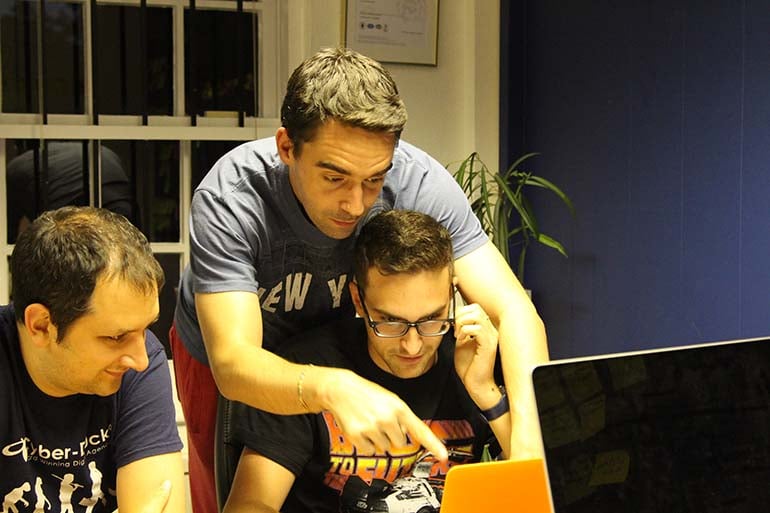 Working hard to resolve the tricky connection to the OpenPathsAPI, Clement receives a little help from Sylvain (from Team Arbot).

User creation was supported via Sentry, and final visualisation achieved by integrating the Google Map API JavaScript with OpenPaths data. With a suitably duck-filled logo, Raj and Calum compiled the branding and front-end work, with a little help from Bootstrap.

While happy with their MVP web app, the Duckfinder team are excited to move forward to the second stage of clever features, wireframed during the hack. They would like to design and build a full mobile version of the app, with further prediction of when the individual would be available; ideas included the definition of working and private hours, and estimations of when they could be commuting (and perhaps able to take calls).