Lessons Learned from The Web Is Conference

At the end of October, Calum and I headed to Cardiff for The Web Is, a two-day conference celebrating 25 years of the World Wide Web. The single track event played host to a wide range of the web’s greatest innovators, storytellers and educators and they truly inspired us with their stories. Here are our highlights.

Chris Murphy kicked off the day with the first talk. He spoke about his experiences in academic education, teaching Interaction Design at the University of Ulster. We really liked his point about working together in teams. As he explained, 1 + 1 is actually equal to 3 as teamwork delivers more than just the sum of the parts. He also went on to talk about teaching on the web, stressing that online courses are great for learning but there is no substitute for human input. As humans, we are messy but we learn more from each other, face-to-face. Chris wrapped up by reminding us that, while we always need to learn new technical skills, we still need to work on our basic skills of self-belief, confidence, manners and politeness. 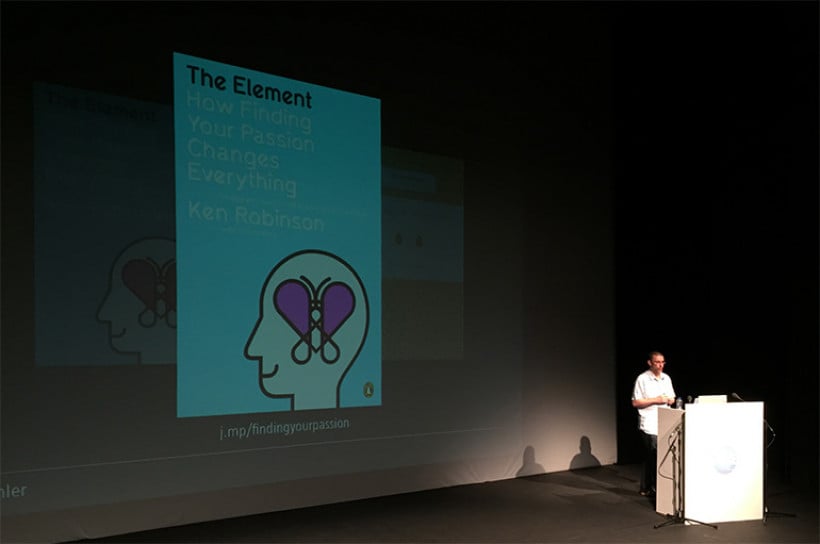 Nathan Ford spoke about his experiences designing for the ever-changing web and gave relevant advice. Make early contact with key stakeholders to avoid late surprises. Websites behave like wicked problems and can be hard to solve because of incomplete, contradictory and changing requirements. Sometimes when we solve one problem it can create other problems we didn't foresee. Smaller, agile sprints can be used to deal with wicked problems. Each sprint cycles through three stages: research, design and build. By using sprints, more problems can be revealed with the knowledge there will be more time to deal with them in the next sprint.

Anna Debenham on Designing for TV

Anna Debenham opened our minds to the world of developing for game consoles and smart TVs. We can forget that these systems have browsers and we tend to silo devices into phone, tablet and desktop only. Low-income households are more likely to have a game console than a PC which means this becomes their only access to the Internet and the websites we build. Consoles and TVs aren't just for games, TV and movies anymore; they're complete entertainment systems. This means the web is a shared experience unlike a phone, for example, which is individual and personal. A large TV screen doesn't always mean we can show more information. We need to think about how far away users may be sitting and what they'll be able to see and read at that distance. Also, we should always test with real devices — consoles can sometimes report that they support features when they don't. 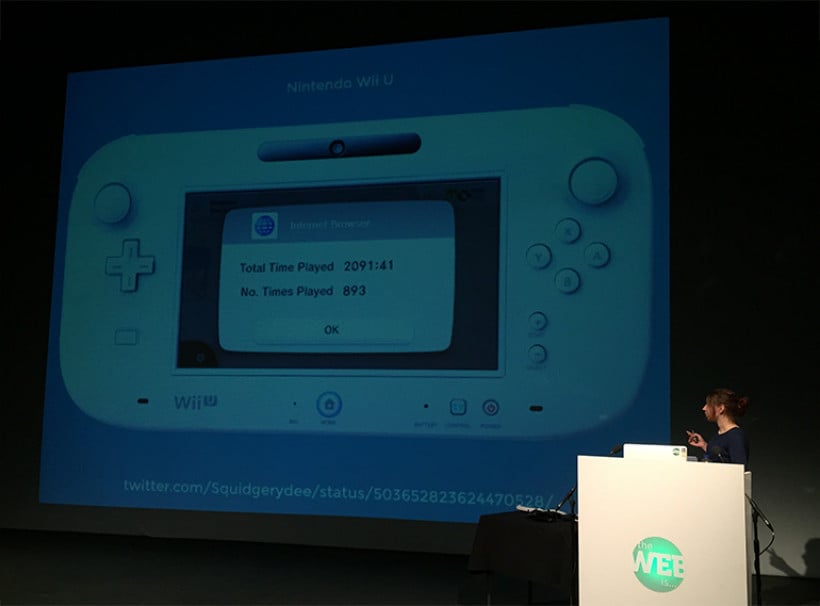 Scott Jenson began day two by talking about why we need to move our native apps to the web. He explained that apps have a thin crust of effort, meaning users are only installing apps if they're really important to them. They’re being conscious about what they fill their home screens with. Despite this user behaviour, the number smart devices (watches, fitness trackers and even digital scales!) is growing every month and each device needs its own app. As more and more are released, can we really sustain installing every app on our phone? How can we solve this? The web, of course.

A website doesn't need to be downloaded into the phone. We could link to URLs in the browser through Bluetooth to replace the need for downloading multiple apps. Scott showed off some examples of how this could work, including a vending machine powered by a Raspberry Pi, which links the user to a web based UI on their phone. Clicking a button on website would vend that choice of chocolate bar. He also gave every attendee a low-energy Bluetooth device to start prototyping with. He finished by saying while browsers aren't quite ready yet their teams are excited about this and working to make Bluetooth more accessible on the web.

We saw Andy Davies give a great talk about web performance at Port:80 last year so it was great to hear him again with some new data. Andy started with a great quote: "The web is for everyone but only if we build it that way.” As designers and developers, we’re all responsible for making sure our websites are light and fast. Content is priority and as a good benchmark we need to be loading content first (it’s the reason users are visiting the website!). Speed can also help improve profitability, with Staples increasing their conversions by 10% just by shaving one second of loading time off their median pages and six seconds from their smaller pages.

Studies show that we become more tolerant as we get further into the purchase funnel. We’re more likely to leave if the website is slow at step one of the payment process compared to step four, for example. We persevere. It was interesting to note that sometimes speed can be suspicious. If results are returned too quickly we can sometimes trust them less. Andy summed up by saying we need to be deliberate with the way we optimise and need to build performance into our workflows. People deserve the best we can give them.

Brad Frost closed the conference by talking about being open. The web is ubiquitous and its cross-platform nature is its power. It's built on a foundation of open standards and collaboration. It's easily to share out thoughts and to pool knowledge. We can solve our problems through online communities like Stack Overflow and Quora. We can collaborate on a global scale, not just a local one. We need to be open by default. Sharing is important for the future of the web and we shouldn't protect what we do. We need to become teachers as well as listeners.

Brad made a great reference to Chris Coyier’s license on CSS-Tricks. Designing and developing in the open makes it easy to share what we're doing. It also allows us to get broader feedback and alternative approaches that we may not have thought about. Brad showed another example of a project he was currently working on. After sharing the payment process with his followers, one wrote an article in reply detailing a better approach that he should take. He concluded by reminding us that we set the stage for how the web community acts on the web of the future. It’s our responsibility.