It’s the most wonderful time of the year. When the Cyber-Duck HQ descends into battles over the cheesiest Christmas jumper, festive tunes and the last mince pie… it’s definitely time for our best tradition. The holiday hack! This year, we took stale corporate cards into a new dimension. Check out our Augmented Reality Christmas card.

At Christmas, funny and poignant traditions take centre stage. Posting beautiful, hand-written Christmas cards is a lovely way to show that we care. But we’re not alone. The UK spent a staggering £1.7 billion on cards last year. Business cards are often impersonal or dull! So… how could Cyber-Duck go that extra mile for our family of clients and suppliers?

Bring Our CyberSnowman to Life!

We’re obsessed with creative R&D and hackathons. Telling stories with technology is so evocative – so playing with Augmented Reality (AR) was the answer! We painted a beautiful scene for our card, with a dapper CyberSnowman up in the snowy pencil mountains.

But, there was a surprise. Clients opened their gold envelopes to find a mysterious invitation. They could download Aurasma – HP Autonomy’s free AR platform – follow Cyber-Duck and point the app’s camera at our card. The scene came to life right in their hands! Little animated Cyber-Ducks popped up and they could even watch a special message from the team.

You can even try it for yourself! Head over to our microsite, follow the quick guide and watch our CyberSnowman burst out of your screen. You can even send a personalised card to a friend. 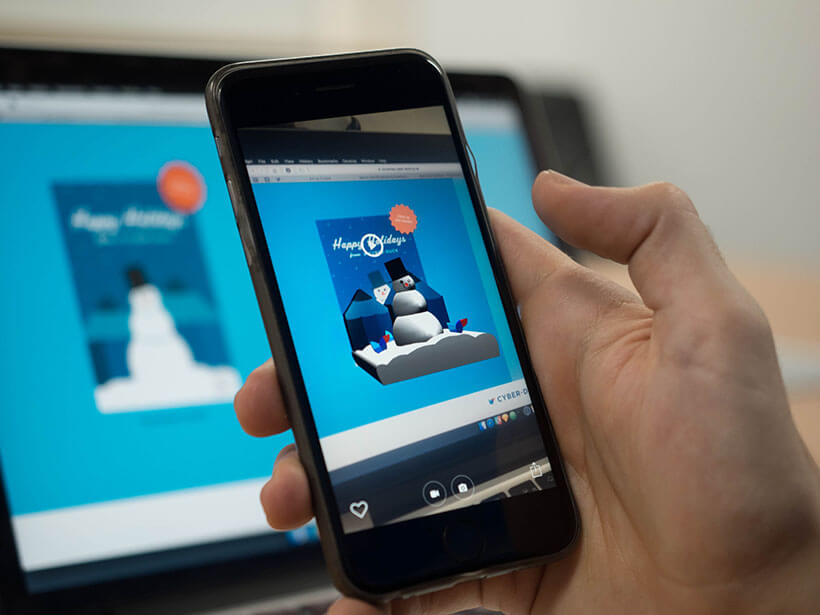 Head over to our microsite to try our Augmented Reality Christmas card!

What Is Augmented Reality?

2016 was the year technology could even upgrade reality itself. Augmented Reality (AR) blurs the line between real and computer-generated experiences, enhancing what we see, hear and feel with extra digital content. Typically, this is handled by AR apps like Aurasma. They invite users to point smartphone cameras at certain trigger images. Video or 3D elements would then overlay the ‘real world’.

Pokemon Go was an epic example of this. At its peak, over 21 million users played for at least 45 minutes a day. The Team Instinct vs. Valour battle was intense at Cyber-Duck this summer… so we were itching to try the tech for ourselves this Christmas.

How Did We Create It?

Firstly, we could create a standalone app that would just manage and animate our card. The Unity game engine and Vuforia (an AR add-on) would have been perfect for this. Adam had used both for a client AR prototype and liked how robust they were. But ultimately, we decided against this route. The price was high and we had a deadline (Christmas!!). Creating, publishing and approving different apps to each store wasn’t feasible.

Instead, we would design, build and upload our card to a popular AR platform. Users can easily download apps like Aurasma, Augment and Blippar for free and interact with content. Used by the likes of the Bank of England, Planet Earth and McDonald's, they already have a nice social following! We decided to go with Aurasma, as that would allow us to focus on the card’s design and use a 3D modelling software to create the AR elements. 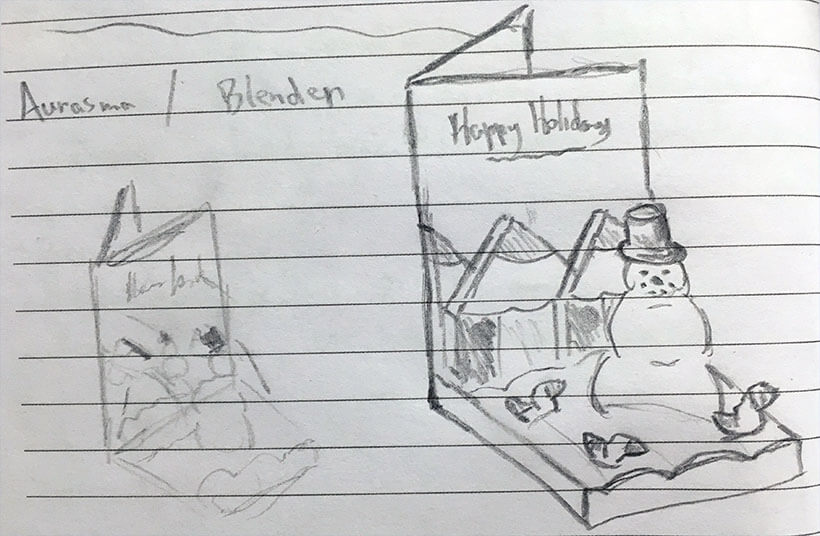 Paper prototyping is a quick, easy way to explore designs. Adam explored how he wanted elements from the physical card to come alive!

Christmas cards are usually displayed slightly open and resting on a surface. So, using augmented reality to make elements pop out of the card towards a receiver would be powerful! We designed a friendly snowman as we imagined it would be fun to explore the 3D model.

Adam used Blender (a 3D software) to animate the snowman and added AR elements in Aurasma Studio. It was a nice combination, as he could export and view his animations from Blender in Aurasma.

This early render showed an idea of how the final 3D elements would look from a receiver’s perspective.

Testing physical models was exciting! It had the ‘wow’ factor we were after, as watching the snowy scene come alive was pretty impressive. But, we realised adding more personalised content could reward users who had downloaded the app even more. We filmed a special Christmas message from the entire team, added our showreel and overlaid the video as yet another AR element.

Once we’d printed, signed and delivered our fun cards to Cyber-Duck’s family of clients, suppliers and friends… we wanted everyone to get in on the action. We turned our card design into a simple microsite with a punchy video! Now, users can personalise our card, generate a custom URL and share our augmented reality experience via Facebook, LinkedIn and Twitter. 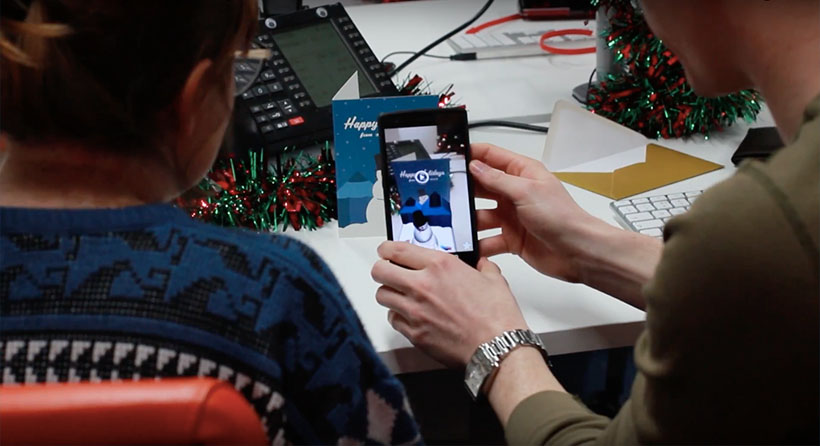 The final card in action! Receivers could play with the animation and watch a special appearance from our team.

Our augmented reality project created a unique, fun twist on the usual Christmas card! Our clients and friends enjoyed watching the snowman come alive with an extra appearance from our entire team. 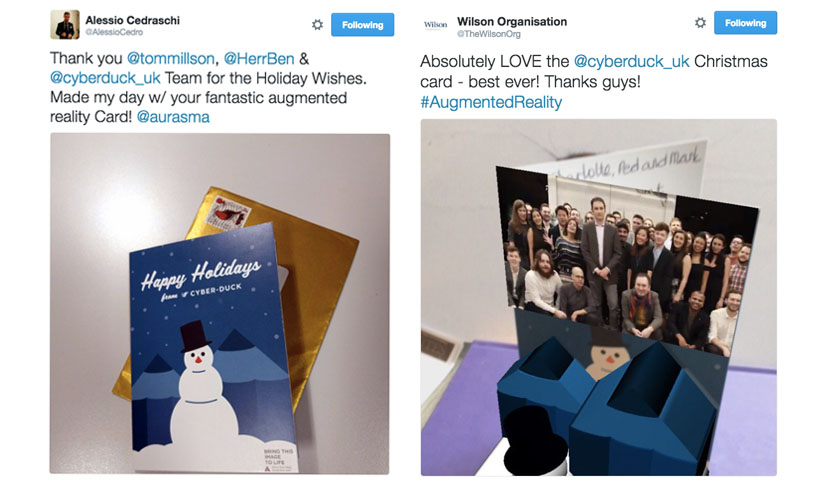 Our clients and suppliers sent great feedback about the card on Twitter!

More and more businesses are experimenting with virtual and augmented reality. Creating immersive experiences for your users is unique, engaging and above all… memorable! Our user-centred approach would invite your audiences to explore captivating stories with technology, rather than ‘tech for tech’s sake’. Please get in touch to find out how you could stand out from the crowd.