Last week Cyber-Duck took part in hosting the Young Rewired State’s Festival of Code as a YRS Regional Centre. We mentored and facilitated for six aspirational coders aged 13-17 at our Elstree offices as they took part in the biggest youth coding event in the UK.

The Young Rewired State's Festival of Code creates a nurturing community around young people aged under 18 who show talent and the drive to teach themselves how to code and develop. The Festival of Code gives these young people the opportunity to meet like-minded individuals and learn from each other whilst doing what they love and creating innovative projects.

The team spent a whole week designing and programming using Cyber-Duck's facilities. Then, along with their mentors Tom Payne and Dharmesh Tailor, and Cyber-Duck’s Benjamin Maugain, Team Elstree went to the Custard Factory in Birmingham for the weekend to finish off their project, joining with all the other groups from centres across the UK. The groups were then given until the Sunday afternoon to present their projects, the best projects being awarded prizes for their hard work and creativity. 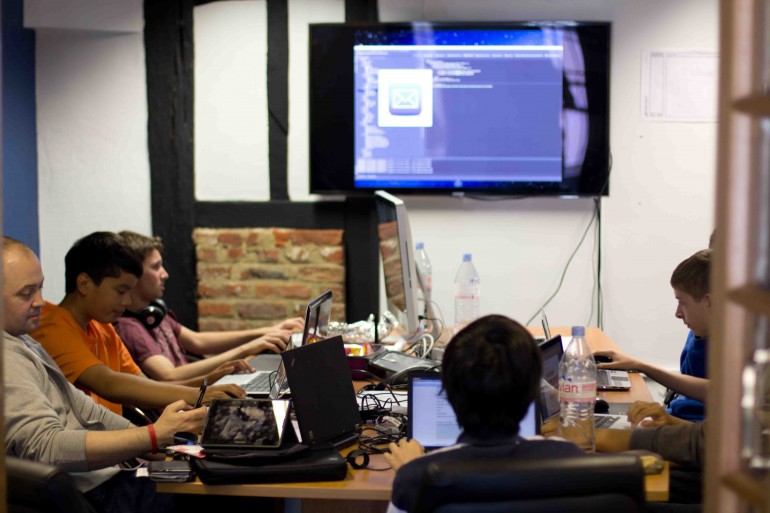 The aim of the week was for the aspiring developers and designers to work in teams, maximising each individual’s skillset to come up with the idea for an innovative app or website. The Cyber-Duck coders, also known as Team Elstree, developed a website to help revitalise local communities and their high streets. The young developers identified the growing problem in their communities with high street shops closing down due to the suffering economy. They decided to develop a website called “Establish.Me” which would essentially help bring the community and local traders together, to breathe life back into British high streets.

The concept of the website is that local councils would help invigorate business in the high street by reducing rent and rates on the empty shops. The local community would then be able to offer donations to local independent businesses who initially would not have been able to afford the premises. The shops would have reduced rates and a set rental term, for example £1000 a month for 3 months and the local community would log onto the website and crowd-fund their favourite businesses to help pay for the rent. In return this would ensure that high streets once again become busy and populated, triggering a boost within the local economy. It also gives the local people a voice in their community, effectively voting for their favourite business ideas. You can watch Team Elstree present Establish.Me to the YRS finale judges on the Bambuser website. 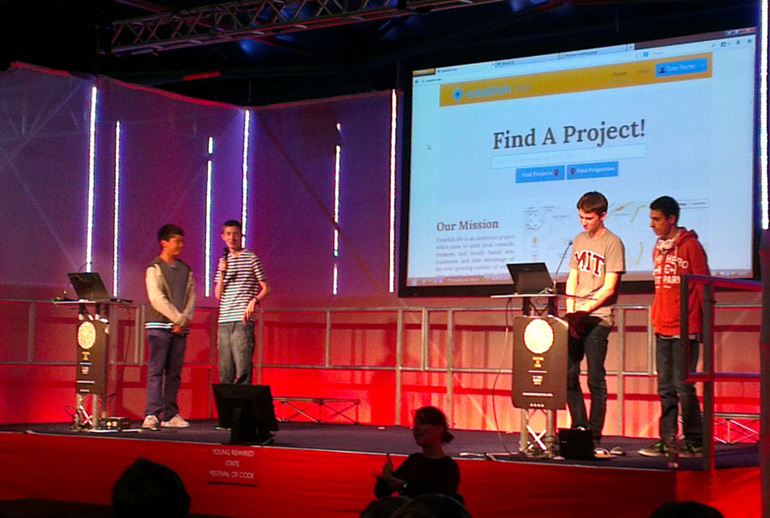 Team Elstree presenting Establish.Me to the audience in their heat

On Saturday, after a morning of finishing touches, each team presented their projects in a show-and-tell to judges in a series of heats. The projects were assessed according to the five prize categories: ‘Best Example of Code’, ‘Best Example of Design’, ‘Best in Show’, ‘Code a Better Country’ and ‘Should Exist’. On Sunday, the winners of the heats were announced and presented their projects to a highly esteemed  finale judging panel of Izzy Lawrence, Aral Balkan, Conrad Wolfram, Ashley Williams and Thomas Grassl. Following this, the overall winners were announced and awards were presented.

Despite the huge amount of talent and diversity of skills evident from all the projects created and showcased over the week, we are very proud to announce that Team Elstree were champions of the ‘Code a Better Country’ prize category. Cyber-Duck would like to offer their congratulations to the team for their commitment, learning and team-work demonstrated by creating such a great project in a short time span. You can watch Team Elstree accept their award from Conrad Wolfram here.

Mentoring the Next Generation

Here at Cyber-Duck, we see the value in events such as the YRS Festival of Code as they help to nurture and produce new talent and shape the future of the digital industry. This is the second year that we have been involved with the Festival of Code and it is something we hope to remain involved with in future. Throughout the week the Cyber-Duck team have been very involved with the young coders, offering them technical advice and tips both from both development and design points of views.

We are continuously looking to get involved with initiatives that seek to spread technology to the wider community. Only a few weeks ago our Managing Director, Danny Bluestone held a workshop at the Digital Summer Camp in Hackney where he spoke to school children about creating apps and how to get into the digital industry.