eCommerce Website The Far Horizons has Two Reasons to Celebrate

There were two reasons to celebrate recently as The Far Horizons received two prestigious awards for our work on their new tailor made website. 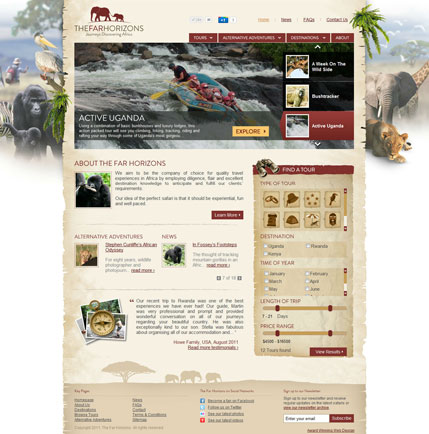 The homepage of our latest award winning production.

We were ecstatic when we discovered we had won a prestigious Gold W3 Award in the category of Travel for The Far Horizons. The W3 Awards honours creative excellence on the web and also looks to recognise the creative professionals behind all their award winning entries. This year’s competition received over 3,000 entries, with only a handful of those entries being presented with the Gold award.

Cyber-Duck have won two silver W3 awards in previous years for our work on the Optima Optiman game back in 2008 and the Rosslyn Analytics website last year. Later in the week we then received a certificate from the Web Marketing Association’s WebAward informing us that we had been presented the Travel Standard of Excellence award for our outstanding achievement in website development, also for our work on The Far Horizons’ website. 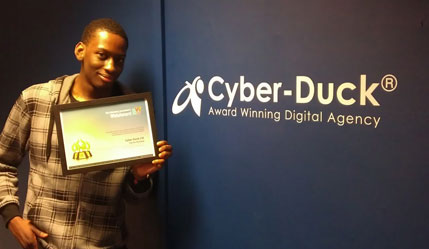 Siji showcases our newly framed WebAward for The Far Horizons.

The WebAwards are handed out to websites based on their design, interactivity, technology, content, innovation, copywriting and ease of use. This is the first time Cyber-Duck have won a WebAward since 2007 when we were awarded the Real Estate Standard of Excellence for our work on the Greenstone website.

Cyber-Duck’s Production Director and project leader on The Far Horizons’ website, Matt Gibson was overjoyed with the double award win, stating; “It’s great to see such a creative project rewarded with these well-respected accolades. We believe we have produced a unique user experience for the East African safari tours market. We are continuing to enhance the marketing and UX (User Experience) on the website and hope to win more awards and generate more conversions for The Far Horizon.”

These awards have helped to produce one of the best years yet in Cyber-Duck’s history, and we still hope there are more awards to be won, before the turn of 2012.