Following our new expansion into one of the UK’s hottest tech hubs, Leeds, we were invited by the University of Leeds to judge their second annual hackathon. With Yorkshire Building Society and PwC setting challenges, the hackathon had a distinct financial services angle. We sent New Business Manager Tom Millson, also our FinTech sector expert, to support and tutor the students.

As someone with a keen interest in tech and on a mission to educate the world on just what is possible with modern and future technologies, I love a hackathon. There’s something about getting your hands dirty in a pile of messy code that fascinates me, particularly if there’s an exciting product at the end. It’s how I got my start in digital, so paying it back to the students of the University of Leeds as a judge was too good an opportunity to pass up.

This was the second year of the hackathon, and registration sheets were bursting with over 100 students eager to take part, more than double the size of the hackathon’s first year. 25 teams were formed, giving plenty of variety to the challenges set by Yorkshire Building Society and PwC.

The YBS challenges were set in partnership with their charity partner End Youth Homelessness. The first challenge was to find a way to help the young homeless to access public services.

To do that, most teams geared their efforts towards the use of identity tech. They wanted to use the facial and fingerprint recognition technology in modern smartphones to allow the young homeless to access services.

In practice, the teams’ plans involved allowing the young homeless (and, in theory, any homeless person) to set up a digital identity using technology most people could access. The finished product would be able to gather personal details and store them securely, allowing individuals to access services like libraries and banking. These attributes would be accessed by verifying your identity using your face, fingerprint, finger veins (more unique than fingerprint) or even RFID tech such as wristbands and key fobs.

The second challenge set by YBS was to use tech to help improve the financial literacy of the young homeless. Some interesting ideas here involved the use of chatbots. But one idea I thought was interesting centred on the concept of preventing homelessness because of poor financial management. Of course, this wouldn’t cover every case, such as death or divorce, but it was interesting to see one team look at this from a prevention angle. 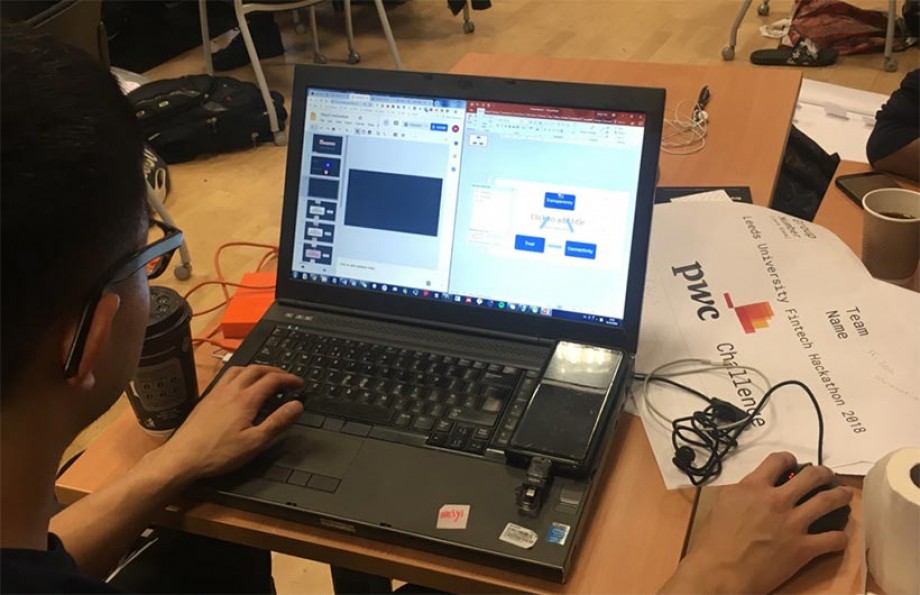 The Leeds University FinTech Hackathon involved intense work over a 24 hour period. The teams had to work fast, and had to present their project at the end.

In a world of fake news and post-truth politics, it can be hard to know where you truly stand with organisations you engage with. This is particularly the case in the charity sector, with recent scandals making headlines as increasing numbers of donors are becoming disillusioned with the charities they want to support.

While some teams did focus on the B2B relationship – one team produced a memorable chatbot that allowed for very quick due diligence of an organisation by asking a simple question – most focused on the relationship between the business and consumer, especially in the charity sector.

To that end, we saw no less than five blockchain projects each with the same concept: improve the transparency of charities by allowing people to donate on the blockchain and see exactly where their money goes when a charity uses it. Indeed, this was a very similar concept to our own BlockAid project at last year’s Quack Hack, and it was particularly interesting to see if, a year later, the students could take this idea further and how successful they would be.

So much to do, so little time

Hackathons are notorious for pushing teams to the limit, and this one was no different. While the majority of participants were computer science students, some even working in tech roles for organisations already, there were groups of students from engineering, economics and even healthcare backgrounds. This created a diverse pool of teams, with many of them learning to do new things for the first time – exactly what a hackathon is for.

One fortunate aspect of this particular weekend was the clocks going back one hour, so while most hacks tend to last 24 hours, the students here got an extra hour. Naturally, some couldn’t take advantage as they struggled to get to grips with their tech, while others were able to deliver projects that were incredibly complete and well-rounded, all things considered.

The final test came in the form of the pitch. As a New Business Manager myself, I know how important it is to effectively communicate your ideas in a way that everyone can understand and in a short space of time. The students essentially had to solve this tough problem: exactly how do you condense 25 hours of hacking into a 60-second (yes, one minute) presentation?

As judges, we were looking to see technical ambition, quality product delivery, relevance to the challenge set and of course a solid presentation. This is incredibly hard to do within 60 seconds, especially while explaining your project, how it solves the challenge and provide a demo.

Many teams struggled with the time. Nevertheless, it turned out those who could concisely describe their project and stay within time were more able to communicate their project’s aims to the judges, resulting in higher scores across the board. 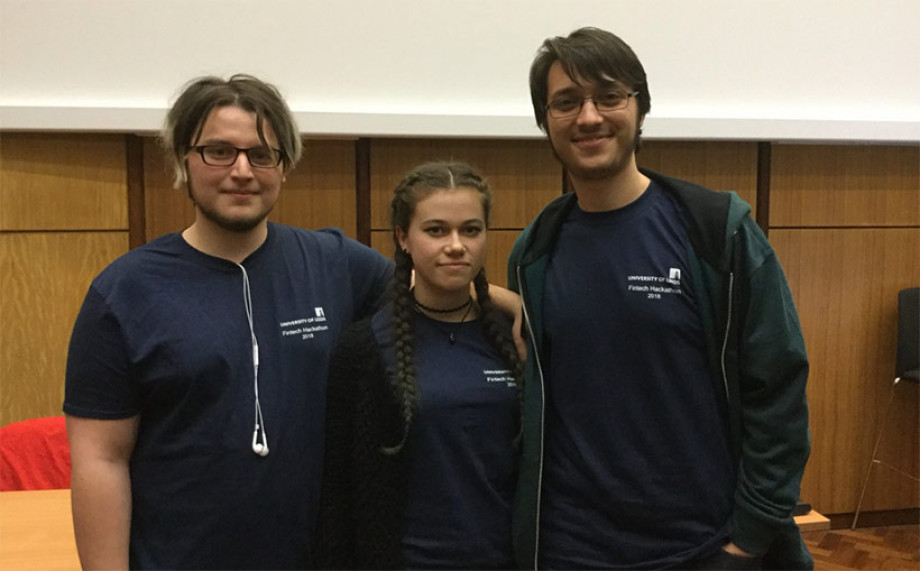 The winners of the YBS challenge built a product that provided the details of homeless shelters and foodbanks across the UK. What particularly impressed me was this was delivered as a progressive web app, enabling users to access it as easily on public library machines just as well as their own mobile devices. Furthermore, they open-sourced the API they created on GitHub so anyone could use it, which I thought was a great touch.

The PwC challenge winners built what I’d argue was the most complete project of the weekend. It was a charity blockchain project, impressively building their blockchain from scratch. Further to this, they built the entire visualisation engine and front-end for donors to see their donations and where it goes, as well as the donation workflow. 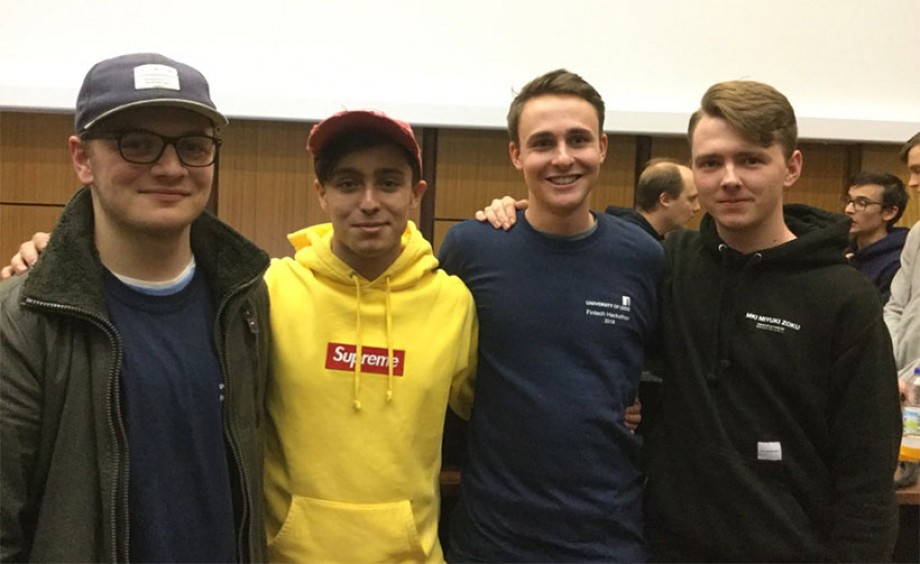 The future of tech

Overall, I am very excited by the capabilities and skills displayed by the students during this weekend. The range of concepts on show and different interpretations of the challenges was fascinating, and many of them clearly have a role to play in the tech sector in the future.

On a personal note I would have loved to be one of the participants, yet judging was a great opportunity and I had fun seeing things from the other side of the table. As someone that is always keen to see the future of tech, particularly in the financial services sector, I received a great demonstration this weekend and I’m keen to try some of these technologies at our next hackathon, Cyber-Duck’s Quack Hack in November. Catch up on our previous hackathon now.

The financial services sector has seen significant disruption over the past decade, more so than any other industry I’d argue, and with all this tech on show being on the verge of mainstream, it looks like there’s still a long way to go before we’re done.

At Cyber-Duck not only do we run our own internal hackathon, the Quack Hack, and take part in external hackathons as participants and judges, we host hackathons for our clients as well. These are intense mini-projects to help build proof of concepts quickly that solve your challenges. Best of all, they don’t have to be on a weekend or overnight! If you would like to learn more about our hackathons as a service, get in touch with our team today.