The continuing feud between Microsoft and Google is the hot topic of this week.

Google have accused competitor Bing of copying their search results via their official blog. Google created “synthetic queries” which are test search queries that tie two terms that normally have no connection and discovered that eventually the same connections start appearing on Bing. Since the accusation, Microsoft (who own Bing) stated simply “We do not copy Google’s results.”

One of the 100 “synthetic queries”, Google created was “hiybbprqag”. The result was a genuine website that had no relationship with the inserted result they chose. Within a couple weeks of starting the experiment, Google’s inserted results started appearing in Bing.

Later in the week Microsoft had their say on the matter and strongly refuted the claims, stating "We do not copy results from any of our competitors. Period. Full stop." Microsoft then went on to accuse Google of click fraud; the practice of systematically clicking on adverts that charge the advertiser for every click, so the advertiser has to pay more.

Facebook have this week launched ‘places deals’ in the UK and around Europe. This means that all users from these locations will get discounts and special deals in shops, cafes and restaurants by checking in on Facebook Places using their Smartphone.

A digital newspaper for the iPad called “the Daily” will be launched in the U.S.A by News Corporation’s Rupert Murdoch. The Daily will cost 99 cents (60p) a week and will be sold via Apple's iTunes store. It will feature news articles, interactive graphics, HD videos and 360 degree photos designed to work with the iPad's touchscreen, and could be released in Europe, but a date has not yet been confirmed.

Autodesk, a world leader in 3D design software, recently filmed and interviewed Cyber-Duck for their new promotional video about digital agencies who use 3DS Max. Members of the Cyber-Duck team were interviewed about how 3D design is implemented in to our work and spoke of the benefits it brings to a website. Stay tuned to the Cyber-Duck website to see the film, which will be coming soon.

The sometimes controversial Google Street View has harnessed its service to bring you Google Art Project. Google collaborated with 17 art museums from around the globe, to bring some of the world’s finest museum experiences onto the web. Each painting is captured in around seven billion pixels, making their online display 1,000 times more detailed than a shot from an average digital camera. 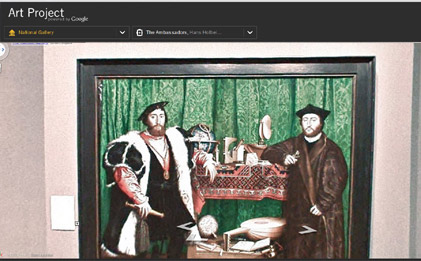 Google's latest collaboration allows you to view famous Art Museums from the comfort of your home.

Google has implemented WebGL, a 3D graphics technology, in to its latest launch of the Chrome browser. Chrome is the first browser to allow you to experience 3D, without additional third party plugins, such as Java or Flash.