TV Stars for the Night

Cyber-Duck were featured on Channel 5’s The Gadget Show last Friday! Matt Gibson showcased the Interactive Dracula Comic which we built for Ortis Deley as part of the show's weekly challenge. See the Dracula Comic for yourself. 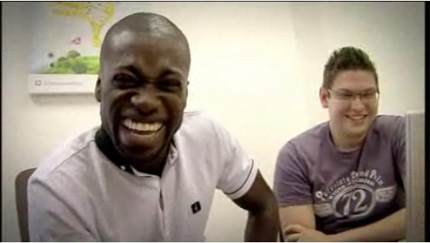 A couple of ducks were out of the office this week as they conducted some mobile eye tracking sessions using the new Tobii X-Series mobile eye tracker. Cyber-Duck have always been advocates of the Tobii eye tracker, and as we are currently working on projects for mobile devices, we were thrilled to be able to use the mobile eye tracker for the first time, with hopefully more opportunities in the future.

Cyber-Duck are set to develop the new KFTV (Kemps Film and TV) website with long standing client Wilmington Publishing. The project involves our team planning, designing and programming the new website and to integrate it with their existing CRM and CMS systems. Cyber-Duck already have worked together with Wilmington on several projects over 2011.

Research Company, Forrester have asked Cyber-Duck to participate in a study of the use of web video and 3D. As part of Cyber-Duck’s involvement, Production & Marketing Director Matt Gibson will be interviewed on the ins and outs of how Cyber-Duck uses the technology.

Amazon announced its hotly anticipated tablet, the Kindle Fire, in an attempt to compete in a market which is currently dominated by Apple. The latest tablet to hit the market will run a modified version of Google’s Android operating system and you can expect to pay around £130 for the device, although the launch date has not yet been announced in the UK. With a far more reasonable price for the average consumer, it could yet challenge the Apple iPad.

Google have announced a new feature for their analytics software called Google Analytics Real Time. The new analytics interface now enables you to access real time reports so you can instantly see current interaction with a website. You can also measure campaigns before they are launched as well as measuring social media and the impact it has on your website traffic.

Microsoft Corp have fallen to the world’s second most valuable technology company as IBM’s market value rose to help them take top spot. Microsoft had held the accolade for the last 15 years and was worth three times as much as IBM back in 2000. However IBM’s decision to sell their PC business and concentrate on corporate software and services has appeared to pay dividends and help them grow into a market leader.