Your essential update on Drupal’s roadmap

Get yourself up to speed in this rundown – and if your sites run Drupal, read the recap from our recent roundtable webinar, Drupal in 2021 and Beyond, and download our Get Ready for Drupal 9 white paper.

What’s happening with Drupal 7 and 8 end-of-life?

Drupal 7 is reaching end-of-life in November 2022.

Get in touch to request the full roundtable video for Drupal in 2021 and Beyond – it’s free!

Yes, a bit. It’s down to a key difference between how Drupal 7 and Drupal 8 were built. We’ll come on to that shortly.

Okay. What does that mean for me and my Drupal sites?

If you run Drupal, you’ll need to have migrated to Drupal 8 or 9 by these deadlines. Otherwise, you won’t get security patches and updates from Drupal – you’ll have to handle that yourself, which will be time consuming and expensive. (Please don’t do that ???? )

Right. So why does Drupal 8 reach end-of-life before Drupal 7?

Drupal 8 is a big step forward for the Drupal platform. It offers better UX, better caching, better functionality for content editors – all within a familiar interface.

That’s because under the bonnet, unlike Drupal 7, Drupal 8 onwards uses third-party components to power major aspects of its functionality.

But it also means Drupal’s release schedule has to align with these third parties’ releases. If a component that Drupal 8 uses reaches end-of-life, so does Drupal 8.

Drupal 8’s biggest dependency is Symfony 3. Drupal uses the Symfony framework, which is perfect for the creation of complex, secure, scalable and performant enterprise level applications such as Drupal. Symfony 3 reaches end-of-life in November 2021, so Drupal 8 must, too. Hey Presto! Drupal 9.

Gotcha. What about Drupal 7?

Drupal 7 doesn’t depend on so many third-party components and those it does depend on, like jQuery, have been frozen in time with a specific version included in Drupal core. This means Drupal can set its own end-of-life, but it also means those frozen dependencies get more and more out-of-date. Drupal 7 was originally end-of-life at the same time as Drupal 8, but because of the challenges of COVID-19, Drupal has postponed Drupal 7’s end-of-life an extra year until November 2022.

This is partly because Drupal recognises that the jump from Drupal 7 is a big one. It needs to be planned and conducted with care. (If you’re running Drupal 7, here’s a free white paper on that.)

Ok, thanks. So what’s the release schedule for Drupal 9 and 10?

Drupal 9 was released in June 2020. The first version was based on the last version of Drupal 8, which means the upgrade from 8 to 9 is relatively small. There are several releases of Drupal 9 planned, with 9.1 coming along in December 2020 and further updates every 6 months.

But those dependencies we mentioned continue to have a life cycle of their own, so Drupal is targeting June 2022 for the release of Drupal 10. That would give Drupal 9 users a full year to upgrade to Drupal 10 before Drupal 9 reaches end-of-life in November 2023. And remember, the upgrade from Drupal 9 to 10 will be really easy. 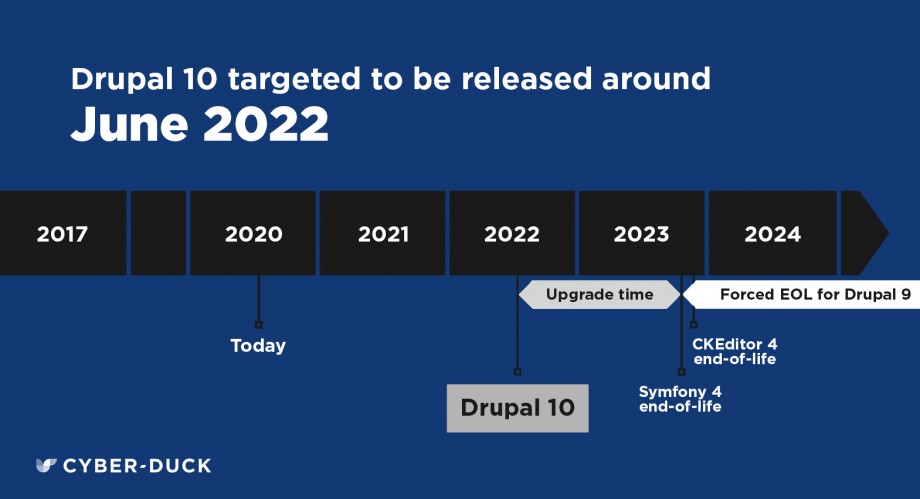 That’s a good question. Yes – and that’s likely to continue, because of the third-party dependencies we’ve talked about above.

However, the upgrades are far easier to implement than they’ve been in the past. The jump from 7 to 8 was technically complex (here’s that white paper to help you again) 8 to 9 is a breeze by comparison, and Drupal have already said they’ve found ways to make the jump from 9 to 10 even easier.

Think of it as baby steps rather than giant leaps – less stressful and more sustainable over the long term.

Think of the changes as a rebirth. You wouldn’t expect your smartphone to still be using the same operating system as a year ago and this is the same. Those dependencies built in to Drupal simply become replaced by something better and better is good. Version 5 of CKEditor has collaborative editing for example.

Should I stick with Drupal 7 for that extra year?

In our view, no. There are huge benefits to moving to Drupal 8 or 9 now.

Firstly, Drupal 8 is a big step forward in functionality: advanced caching, customised content layouts with Layout Builder, a new Media Library, better UX and accessibility for end users and your team – that’s just a few of the many benefits. It’s also something you’re going to have to do eventually, so why not take advantage earlier.

Secondly, to your in-house team, they both look and work in a very similar way to Drupal 7. Yes, the back end is different, but when you edit and create content it feels the same. So you’ll be current from a technical standpoint, but it’s an easy move for your in-house team.

Finally, once you’re on Drupal 8, the upgrade path gets far easier. Drupal can now deliver customer value faster. They’re ramping up releases and, bug fixes and they’ve already brought 13 major features from experimental to stable. In Drupal creator Dries Buytaert’s words, “We’ve made it a lot easier to use and a lot easier to maintain.”

How is Drupal going to develop in the future?

Dries laid out his vision for Drupal’s development at DrupalCon Global this year. There are five strategic initiatives for Drupal, most planned for Drupal 10:

So there you have it. Upgrade to Drupal 8 and 9 now and look forward to automated updates, new themes, out-of-the-box support for React and Vue, and hugely improved UX.

If you want more information on Drupal 9 or would like to plan your upgrade please get in touch. 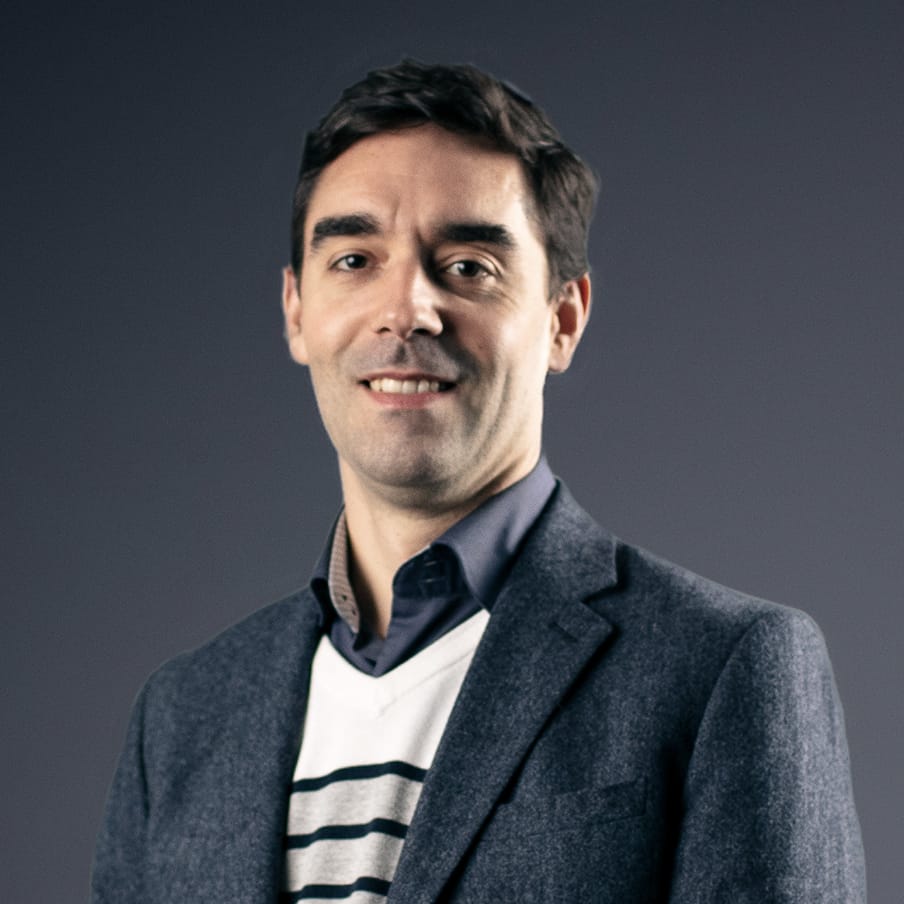 As Cyber-Duck's CSO, Sylvain works throughout the organisation to deliver high-quality technical solutions for our clients. 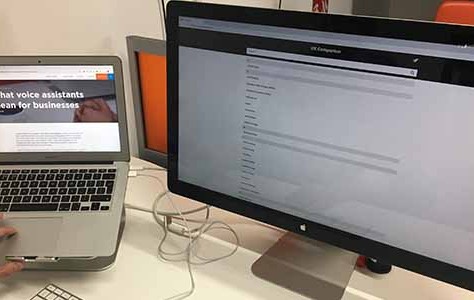 What are Progressive Web Apps (PWA)?

With Apple now also jumping on the bandwagon of Progressive Web Apps (PWAs), the next generation of web experiences is fast approaching. But what are progressive web apps? To get to grips with this transformative new technology, we looked at progressive web app development ourselves and transformed UX Companion into a PWA. 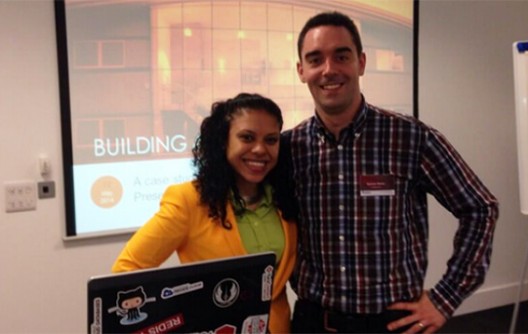 Yesterday, I was selected to present a case study for ‘Rackspace Unlocked: The Hybrid Cloud’ in London; this event is part of the Rackspace Academy, where experts are invited to help educate businesses and developers on how to make the most of cloud hosting solutions. My practical expertise on how to build the most effective payment portals in the Cloud became a crucial element of the eCommerce track; I’ve recapped the highlights of the conference here.