Our Head of Project Management Makes the BIMA Hot 100

Our technical wizard, Benjamin Maugain has been chosen as a BIMA Hot 100 figure in the digital industry. He’s one of 10 celebrated individuals in the Devs & Makers category, and we’re all extremely proud he’s been recognised. One member of the Cyber-Duck team has now been celebrated every year since 2013!

BIMA was founded in 1985 to represent the digital industry and bring together its vibrant community. Their prestigious BIMA Hot 100 scheme rewards stand-out individuals who’ve played a personal role in driving the industry forward, from creatives, leaders and account stars to devs, makers and strategists.

We’re extremely proud that our Head of Project Management, Benjamin was chosen this year! This continues a fabulous Cyber-Duck tradition. We're very happy that one of our team members has been honoured every year since 2013, with our CEO, Danny, Growth Director, Siji and CCO, Matt profiled in previous years. During the celebrations at the stunning Ham Yard Hotel in London last night, the opening remarks from BIMA’s Chair revealed how difficult it was for their expert panel to recognise just 100 professionals from hundreds of public nominations.

As our Head of Project Management, Benjamin is a fountain of knowledge for not just everything tech related, but even managing client projects as well. As someone who loves the structure and logic of coding, Benjamin is always looking to push boundaries and boldly go where no techie has gone before. He has over ten years’ experience as a full-stack web developer, working on a variety of projects and different challenges.

As part of our working culture we encourage our staff to attend Hackathons and even host our own annual Quack Hack one. Being crowned the winner of Barclays Hackathon emphasised Benjamin’s technical prowess. His creative idea to get children interested in money saving habits meant that he could put his tech skills to the test, teaming up with our Technical Lead, Clem. Using an old-fashioned Piggy Bank, with a modern twist, Benjamin set up banking application programming interfaces (APIs), a full circuitry piggy bank and mobile app in 36 hours. 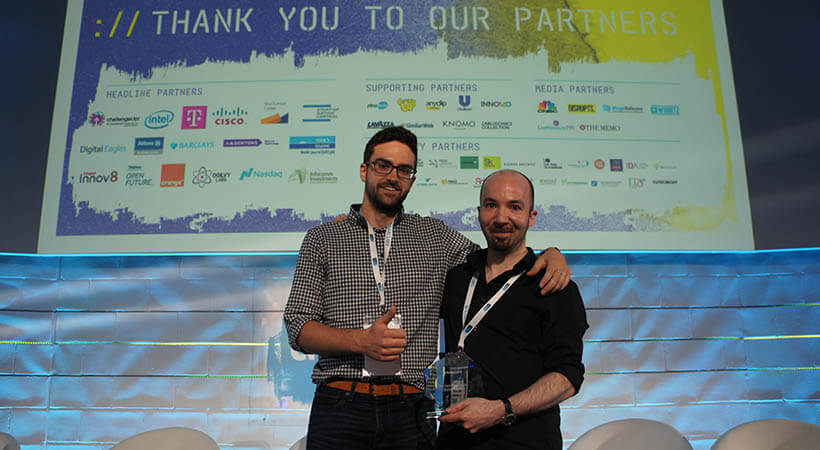 Hey presto, an award for a a smart piggy bank! Read more about the project.

Throughout his career, Ben has always been keen to share his knowledge, like Yoda training Padawans. He’s taught various workshops since 2013 at the Mozilla Festival; focusing on anything from providing robots with personalities (like Sonny from I Robot!) to building web-based Morse machines that help users interpret and read Morse code.

One of the most creative projects Benjamin has undertaken involved inviting passers-by to hack our logo and change its colours. He developed our company logo into a window light-installation, effectively hacking Philip Hue bulbs’ API and coding machine-to-machine (M2M) real-time communication. By using a nifty web app, anyone who passes by our Farringdon office can change the colours of our logo, being as creative as they want!

Benjamin is a huge fan of the Internet of Things (IoT) and is always enthusiastic to tackle new projects. If you’re keen to seek Ben’s expertise with a technical challenge you’re facing, please get in touch.