On 13th December 2017, we headed back to General Assembly London for the final Digital Pond of the year. After an amazing year for our event series, we wanted to celebrate in style by looking to the future and 2018’s hottest digital trend: Augmented and Virtual Reality!

Over the past year, we’ve hosted some fantastic speakers on a range of topics at our very own event series, the Digital Pond. We’ve had detailed insights on digital transformation, data-driven design and even talks that showed how to use empathetic designs to create better user experiences. With such exciting topics behind us, we were keen to make sure the final topic of the year was a hot one. So we packed the mince pies and headed to General Assembly London for Augmented & Virtual Reality: 2018’s Major Digital Trend.

To start the evening off, we had our Client Services Officer Sylvain Reiter deliver a great overview and analysis of the current state of VR and AR. He was joined by Jeremy Dalton and Magnus Moar. Unfortunately, the fourth speaker, Judith Wellner, couldn’t make it, though she will be sharing some of her work with us soon!

Catch up on the highlights from the night.

Sylvain opened the night for us, with an analysis of what AR and VR actually are, before he moved on to show where they came from. It was here that we first heard that VR has been around for a lot longer than most people think. In fact, this tech has been around since the 1980s, reaching its previous high point in the 1990s, when it failed. Why?

A huge issue was latency - the lag between the simulation and the response users would experience with VR. The tech simply wasn’t that enjoyable to use. But an even bigger drawback was its cost.

But in recent years, VR/AR has soared - you only need to look at Oculus to see that. Its founder, Palmer Luckey, started Oculus following a fundraising campaign that sourced $2.4 million in two months back in 2012. Just two years later, Mark Zuckerberg bought Oculus for a staggering $2.3 billion. Clearly Silicon Valley sees great potential in VR/AR, and almost four years later we’re starting to see it cropping up everywhere. 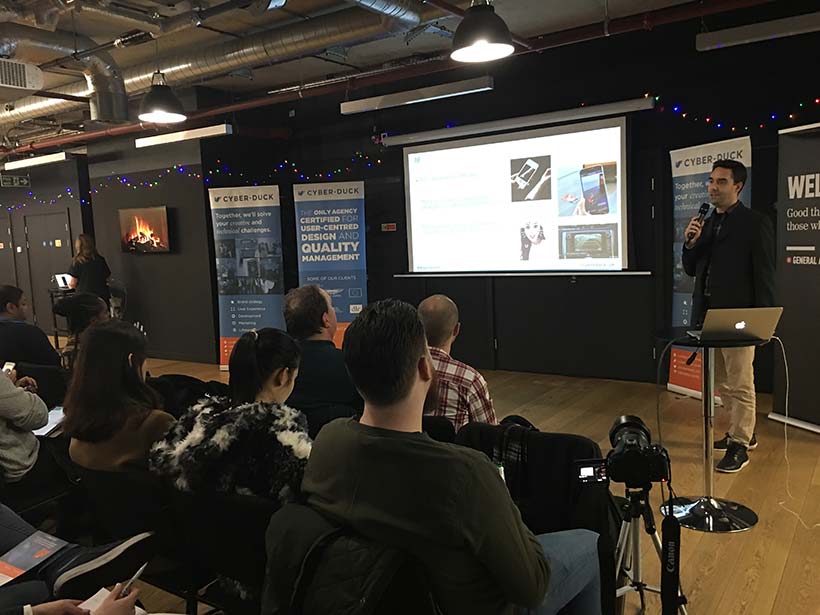 Sylvain opens the evening with his talk on Virtual and Augmented Reality technology.

Therefore, perhaps the most powerful insight of Sylvain’s talk came when he talked about how you can utilise this new technology to improve your business. He recommended that you attend as many VR/AR conferences and workshops as you can, and invest the time and energy in creating experiences now. WebVr in particular is expected to take off in the coming years - so don’t be left behind!

Sylvain concluded his talk by highlighting the work Cyber-Duck has managed to produce at our hackathons, the Quack Hack. This year, for instance, we created a WebVR Cyber-Duck Christmas experience. In other years, we also created an augmented reality Christmas card.

Sylvain’s biggest recommendation at the end of his talk? To go out there and attend as many exhibitions and conferences on VR and AR as you possibly can. The more you know the better, so put the time in now or risk being left behind!

Jeremy Dalton is the UK Virtual Reality and Augmented Reality Lead at PwC, so we were thrilled to have him along for our final Digital Pond of 2017. (You can follow Jeremy here.) Jeremy’s a big fan of VR, and it clearly showed during his talk - he had a vivid enthusiasm for VR that shone in his knowledge.

This talk expanded on the themes Sylvain hit upon before him, adding extra punch to our introduction. Jeremy also highlighted that there is no war between AR and VR. We don’t have to choose between backing one technology over the other, because the two complement one another. Consequently, there are even more opportunities for developing exciting stories and experiences we can use to sell products to users. 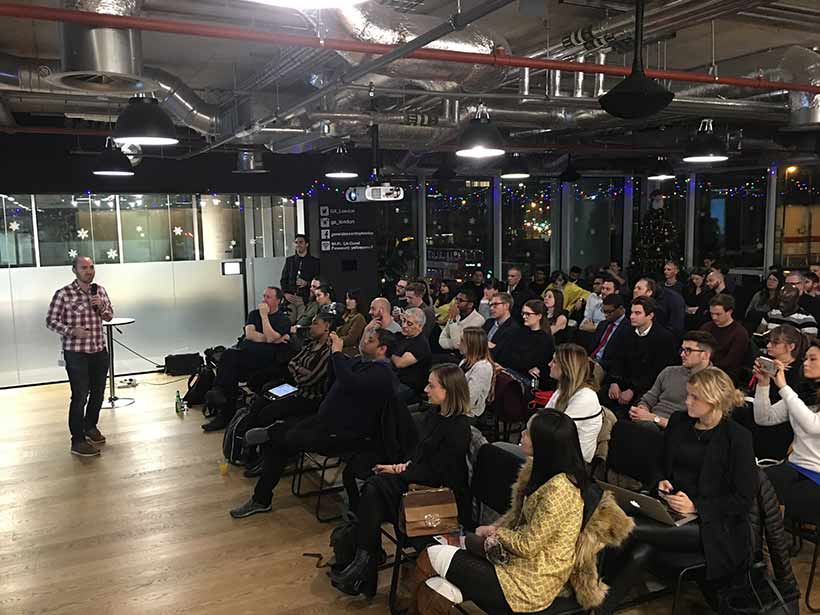 My personal highlight of Jeremy's talk came when he addressed whether or not 2018 would in fact be the biggest year for VR. He pointed out that there needs to be a cultural change before the technology can really take off. We're already well on the way to achieving that - just think of how many people have smartphones, which can now be used as a VR screen - but there's some way to go regarding public attitudes to even wearing VR headsets. As it becomes culturally acceptable, as we become more comfortable with wearing the headsets, and as the technology progresses further, we'll see a boom in VR.

For the naysayers, those who claim VR is just a passing fad that will never catch on, Jeremy made an excellent counter-argument. Most people like to think that smartphones are a relatively new piece of kit - wrong! Smartphones have been around since the 90s, we just didn't call them smartphones. The PDA could do a lot of the things our current smartphones can do, such as send and receive email, but PDAs were written off at the time. Fast forward to 2007 and the years following the launch of the iPhone and - well, now we all have what's essentially a PDA in our pockets! VR may very well go the same way.

Jeremy touched upon the storytelling potential of VR, but this was to be taken up and run with by our final speaker, Magnus Moar.

Our final speaker of the night before the live Q&A was Magnus Moar, Head of Creative Technology at Middlesex University. Magnus joined us to talk about the historic and pivotal role storytelling plays in human society, and how technology is changing the way we tell stories.

Magnus was keen to talk about the potential of VR technology, rather than the tech itself. His points reminded me of the way Yuval Noah Harari discusses stories in his bestseller Sapiens, but Magnus further focused on the benefits of technology itself and how it can affect storytelling. He illustrated his points by looking at previous technologies, and how storytelling evolves to incorporate new tech - think of the impact the printing press had: since the 1500s, books spread wider than ever before, and how we told each other stories moved gradually from the spoken word to the written. Then, the advent of television changed everything again. More recently, video games have provided us with the means to step into a virtual world. Now we don't have to imagine new worlds, we can immerse ourselves in these worlds. 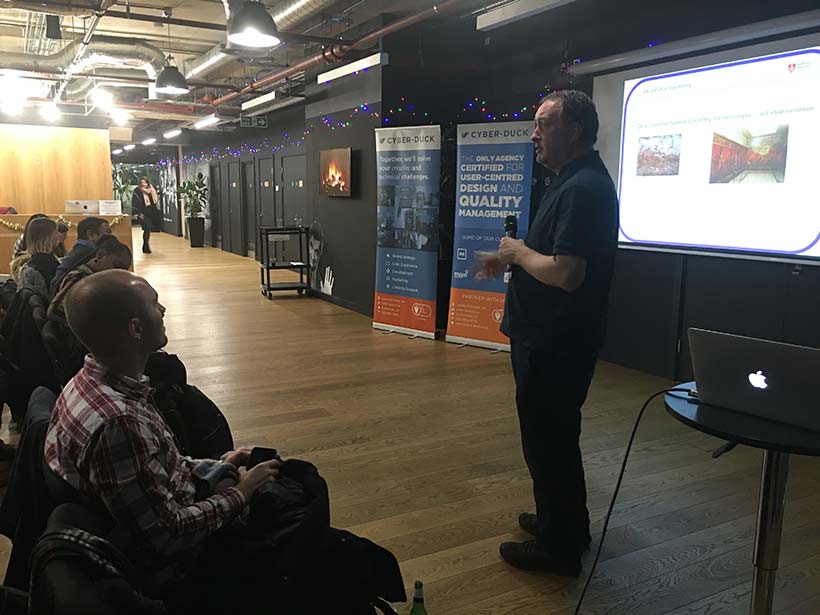 Magnus delivers the final talk of the evening. His focus: storytelling.

As far as storytelling is concerned, it's all about feeling like you're there. We build, paint and craft worlds to step into. We want to be immersed and spirited away. That's why VR is so exciting. It has the potential to bring us even closer to the worlds of our stories. As marketers and developers, VR is an opportunity for us to push the limits of what user experiences we can deliver.

Join Us Next Year

Where has the year gone? Clichéd to point it out, yes, but it really has whizzed by. But just like the year, technology stops for no one! What will 2018 hold? Who’s to say, but we’ll be there to provide in-depth discussions of all the latest tech, methodology and much more besides.

Follow us on Meetup to keep up to date on the Digital Pond, as well as on Twitter for even more insights from Cyber-Duck.

One last thing before we go: have a very Merry Christmas and a Happy New Year!