Eurofighter is Europe’s largest military collaborative programme. Its flagship product is the Eurofighter Typhoon, one of the world’s most advanced, powerful defense aircrafts. Cyber-Duck has worked closely with Eurofighter since 2013; we have provided user-centred digital experiences for its main website, airshows, magazines and more.

WEEKS FROM KICK OFF TO LAUNCH!

INCREASE IN THE PROPORTION OF MOBILE VISITS

DOWNLOADS OF THEIR TECHNICAL GUIDES

Eurofighter operates in a niche, yet highly competitive industry; they compete with key players like Boeing, Lockheed and Gripen. Cyber-Duck has supported Eurofighter with its marketing and user experience goals since 2013.

First, we revamped their main website, which received 25,000 visitors per month. The Dubai Airshow was a significant chance to demonstrate excellence, as it’s a flagship event for the aerospace excellence. David Cameron, the UK Prime Minister at the time, was even planned to appear as an ambassador for the brand.

In later years, we would produce further microsites for internal use, its popular Eurofighter World magazine, and other events, like the Farnborough International Airshow. Our objectives were to:

Incorporate clear information architecture and content to meet the needs of varied audiences, from government officials to keen hobbyists.

Present key data in interesting and engaging ways, to increase awareness of the strength and quality of the aircraft.

First, we delivered a striking, engaging main website in just five weeks. We applied an Agile approach, with weekly sprints and daily catch-up meetings to ensure our team in the UK and the client in Munich stayed on track.

We commenced with detailed stakeholder and persona research. This fed into a new information architecture that could appeal to key audiences, including potential buyers (like government and military officials), journalists, students and enthusiasts.

We rapidly progressed from initial sketches to functional prototypes using Hoisin, our fast, flexible responsive framework. Ultimately, we designed a compelling new art direction and infographics to communicate key statistics about the aircraft. Through revealing the people behind the organisation, we added a valuable 'human face' to the brand.

The new website was celebrated as the showpiece for their stand at the Dubai Airshow and we’ve continued to support Eurofighter since then. 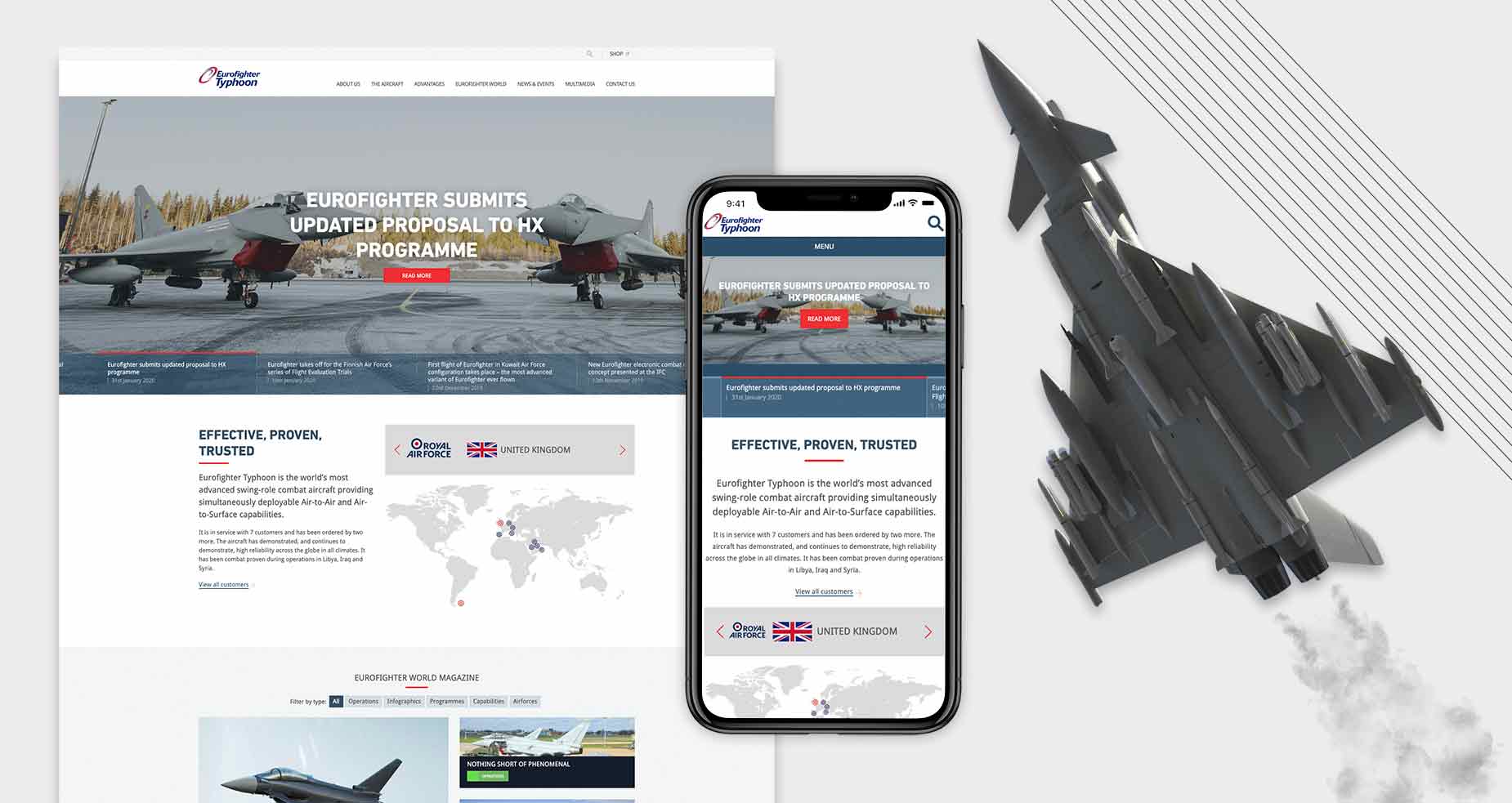 The Eurofighter World magazine contained excellent editorial content; new editions are published quarterly and were accessible online, via a PDF download. But this quarterly schedule meant the editorial team was often sitting on articles for months. The reach of the magazine was limited to approximately 200-500 downloads per month.

In 2017, Eurofighter approached Cyber-Duck to implement a digital-first approach to content. We would empower Eurofighter’s editorial team to publish articles faster, more frequently and increase awareness via social media, SEO and email. Through this, they could increase the reach and impact of Eurofighter World articles.

As the website was featured on a subdomain, Cyber-Duck ensured there was a seamless, consistent user experience. We designed a robust information architecture and designed new interfaces and page templates.

Our developers integrated SilverStripe, an intuitive user-friendly CMS, so the team could populate editorial content and articles easily. We built complex, bespoke blocks to match the specific layouts of the original magazine, such as a Q&A and quick facts. They all had to be dynamic, flexible and easily editable within the CMS.

Based on Eurofighter’s meticulous security requirements, we implemented a publication workflow within the CMS with different levels of content editors and administrators. 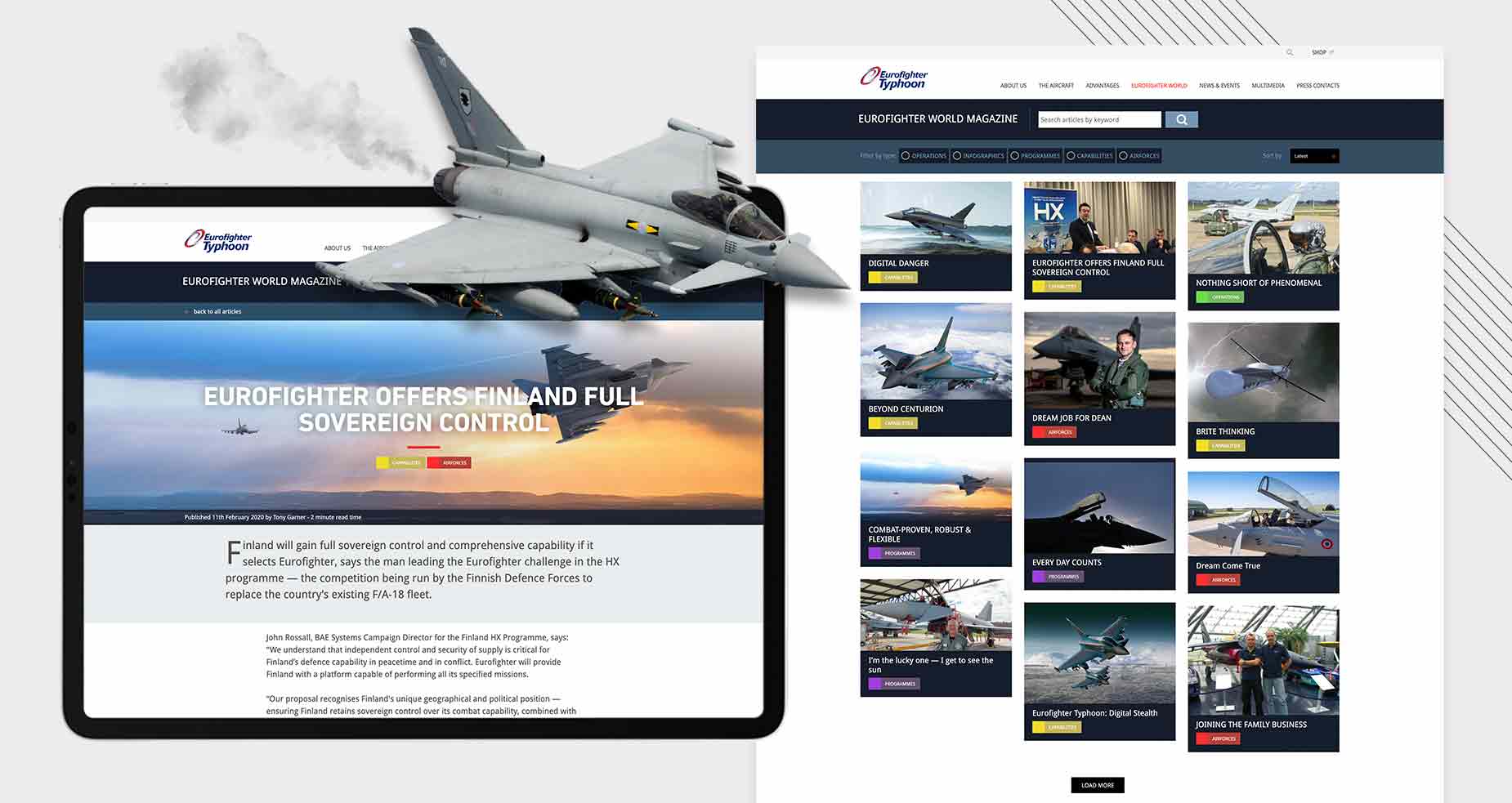 In 2018, Eurofighter needed to capitalise on its attendance at the Farnborough International Airshow. They engaged Cyber-Duck to build a one-page microsite that would become the foundation for an effective promotion strategy.

We designed an engaging website that was headlined by a fascinating 360-degree video of what it’s like to pilot a Eurofighter Typhoon. The website explained what visitors could expect from Eurofighter. That included their main marketing messaging, information about displays and live social media feeds.

For the curious fan who wanted to learn more, it displayed further relevant content such as press releases, Eurofighter World articles and a full, downloadable press kit for the media. 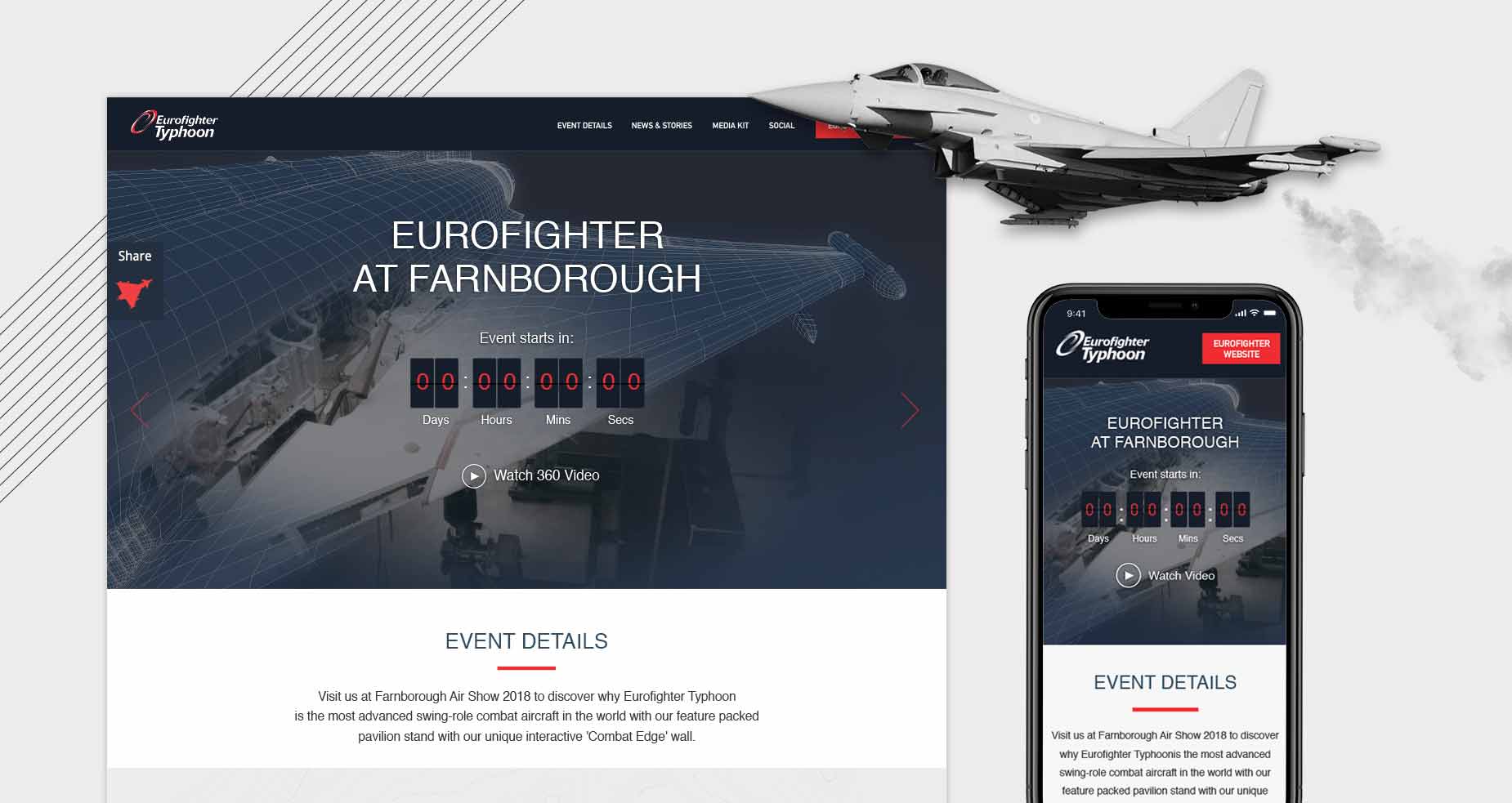 Since the original launch, the website has performed excellently. Users have become far more engaged in comparison to the previous website: 9% of visits result in conversion, and technical reports and magazines have been downloaded over 5,000 times.

Mobile traffic has increased by over 100% (comparing July 2014 to November 2013), and proportionally it has risen from 16% to 27% of total web traffic over the same time period.

WEEKS FROM KICK OFF TO LAUNCH!

INCREASE IN THE PROPORTION OF MOBILE VISITS

DOWNLOADS OF THEIR TECHNICAL GUIDES 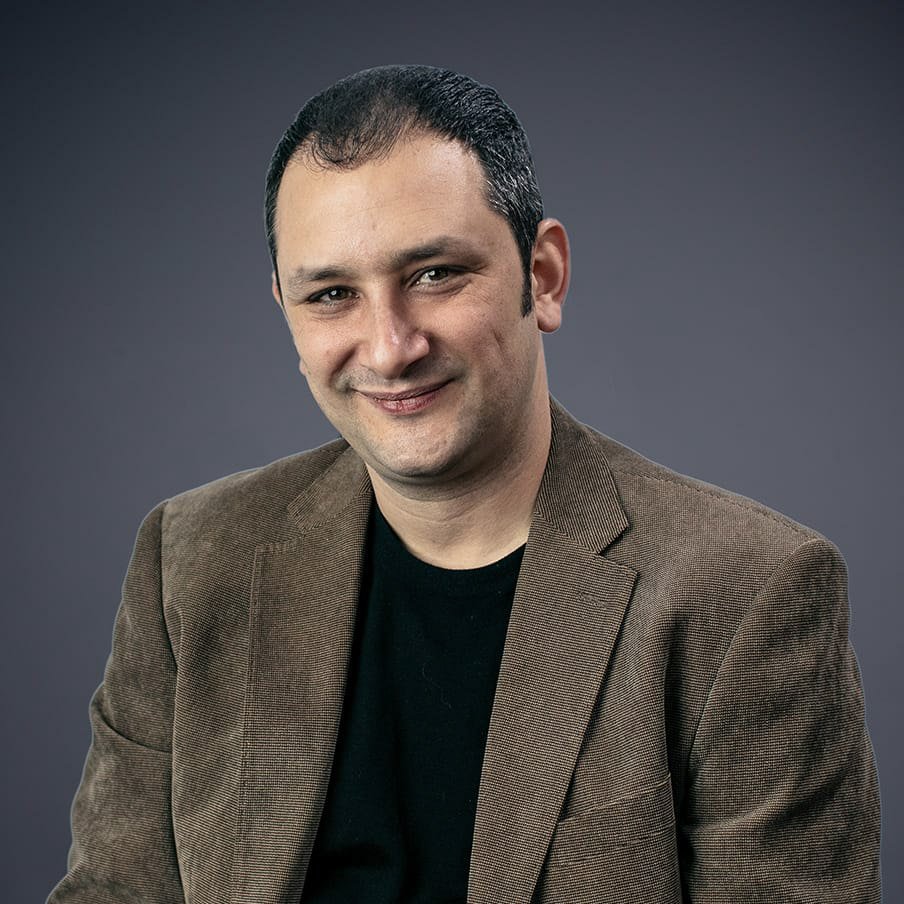